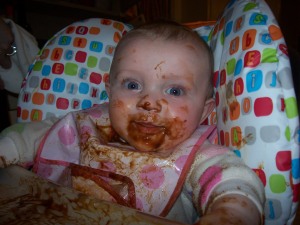 Early this afternoon, Stella got upset and took only 100 mls from the bottle. It was really weird. All my fears and worries came rushing back.

Granted, she took around 180 before and after that. But what a scare. I was so upset, I yelled at Cody like a maniac. He was holding her because he wanted to try feeding her again, after I told him what had happened and how she didn’t seem to want to eat and was getting fussy about it, but all she did was cry and cry so finally I screamed from the other room, “JUST GIVE HER THE PACIFIER!!!” The idea of trying to feed her when she clearly did not want to sent up an army of angry red flags. Forcing it never works–it makes her want to eat less. Not that he was really forcing it, but he was nearing that old territory in my mind and I could not handle it.

It will take a while for me to really accept that she will not always take what I expect and that this is okay.

In the background, I am feeling nervous about her six-month “well child” visit with her pediatrician. He hasn’t seemed to have fully understood how well she is doing. How huge it was for her to start enjoying eating and to not only not lose weight but to start to gain a decent amount after just three weeks without the tube. I mean, it doesn’t really matter what he thinks. And there is no chance of Stella the Tube Girl II showing in theaters–ever. That sequel will never be made. But still. The last couple of times I’ve left his office feeling pretty crestfallen. Like the feeling of letdown when you go on a great first date, then have a terrible second date. You just feel so deflated. The neurotic me (well, maybe that just is me) is afraid that if Stella doesn’t gain an insane amount of weight, he’ll act all concerned and I’ll get all riled up and strongly disagree with him and stand my ground but then secretly, after we leave, I will worry about everything he said and fall apart and it will be unpleasant for all.

So I weighed her today. It was totally unnecessary and probably counter-productive. But I just had to. She weighed in at 15 pounds, 14.5 ounces. So by our count, she’s gained about 8 ounces in ten days. It’s great! Of course, I hear the doctor’s voice in the background saying how he likes to see an ounce a day. But from what I understand, around this age, the rate of gain slows down naturally. And really, she’s happy and healthy and clearly gaining an appropriate amount of weight so who cares!

She’s a week away from her 6-month birthday and when she hits 16 pounds, and clearly she will surpass it by several ounces, she will be above the 50th percentile curve, I think. She was in the 50th when she was born. I will remind the good doctor of this if need be. Have I told you how much I hate percentiles? They drive me nuts. I think that unless a baby is in trouble, no parent should even know the percentile. What’s the point? There are chubba-butt babies that are completely off the charts and their parents know they are big babies. There are babies that are petite–I have a feeling their parents know they are small having looked at them every moment of every day–and very content in the 3rd percentile. And the vast majority of these babies, all over the spectrum, are healthy. So what’s with the percentile obsession? The growth percentile calculator on BabyCenter says, “See how your child’s growth compares.” So there we go, comparing our babies with their peers right out of the womb based on some number that, for the most part, means nothing. I doubt my parents knew what height/weight percentile my sisters and I were in. And I KNOW they didn’t chart our head circumferences! They just knew we were eating, pooping, sleeping and, overall, happy and healthy. That was enough! And it should be for today’s parents. Rant over.

Yesterday’s occupational therapy appointment went very well. Stella ate beforehand, so Robin didn’t get to see how fabulously she eats, but we were able to discuss her amazing progress, affirm the whole journey, and get some questions answered. We got some great tips on how to encourage her to get more comfortable on her tummy and with rolling and sitting up. We learned that we should definitely proceed with spoon feeding full steam ahead and not worry about it adversely affecting bottle feeding. We have some other decisions to make–like when to switch to 20-calorie-per-ounce formula and whether we want to see if the baby food in the bottle really is making it more appealing or if it was just coincidence. I think Cody and I are reticent to switch anything up just yet, but we probably will at least switch her to 20-calorie-per-ounce concentration, as it is the standard for breast milk and formula and may better allow Stella to regulate her intake.

I gave Robin a “thank you” card and photo to remember Stella by–one in which she is clutching a bottle the way Gollum held the ring. I remember our first meeting with her well. We were so thrilled to be there. To finally be getting the help we needed, from the best of the best. (Robin is a renowned feeding specialist.) I’d been trying so hard to get Stella to eat for at least a month at that point and I was falling apart. No one had been able to figure out what was wrong, and they didn’t see the daily struggle and didn’t have the sense of urgency that was needed to move things forward. I felt so alone and hopeless and worn down. During that appointment Robin said with such confidence, “I’m going to see you through this.” And she did. As I reminded her in the card, she listened to me cry and rant. She calmed me down, educated me and backed me up. I am forever grateful.

Barbara Hescock, my mother, who stayed with us for almost three whole weeks and spent Thanksgiving cooking for three, two of them severely depressed, in our crappy kitchen instead of her new wonderful one with a crowd of eager company as she’d planned long before… she arrived during our stay at Children’s and got me through the worst days of my life, helped me rise to the challenge of dealing with the difficulties of the tube while feeding me (everything made from SCRATCH–even tomato sauce–with so much love) so I didn’t disappear just as she so graciously did during Stella’s first weeks–she was the hands behind my hands, just what every new mom truly needs–and who even tolerated me snapping at her a couple times without holding it against me

Robin Glass, MS, OTR, IBCLC, occupational therapist, who, as I just mentioned, was our rock and provider of wisdom, sanity and hope!

Devorah Steinecker, MD, cranial osteopath who treated Stella about a dozen times and helped to greatly decrease Stella’s reflux and aversion, who was 100% confident that Stella would get better and became one of our biggest supporters when we removed the tube, a time when we really needed positive voices around us

Sarah Tyack, RN, lactation consultant with whom I met several times who helped identify Stella’s reflux, a major breakthrough, and who saw me at my worst and instead of judging me, connected me with the help I needed to cope and the help Stella needed to recover

Janet Whalley, RN, co-author of Pregnancy, Childbirth, and the Newborn: The Complete Guide and lactation consultant that I met with several times who became a mentor and person to call when I got worried, who was always so understanding and concerned about us and provided any and all ideas and information she had

Ann Keppler, RN, co-author of Pregnancy, Childbirth, and the Newborn: The Complete Guide and very well known in Seattle for her mindblowingly helpful First Weeks seminars, she sent me the most amazingly supportive and helpful email in response to my random, frantic email to her

Judy Herrigel, RN, founder of First Weeks and longtime lactaction consultant to whom I reached and talked to about Stella’s issues and who expressed much compassion and understanding

Dr. Trish Raymer, one of Seattle’s VERY BEST family practitioners–my doctor and was Stella’s doctor until we switched to Numrych who had instant access to all of Stella’s lab results, appointment info, etc. at Children’s Hospital which made our lives easier–who got Stella in to see Robin and who admitted us to Children’s when she saw that we needed urgent help, and who was always so delighted to see Stella that it warmed my heart even on my soul’s coldest days

Dr. Thomas Numrych, Stella’s current pediatrician, who returns my emails and calls and spent a lot of time talking to me during our toughest days… I have been complaining about him a bit,sure, but I think he’s a good person and good doctor

Dr. Marguerite Dunitz-Scheer, director of the tube weaning clinic in Graz, Austria who always knew that Stella could do this and who helped convince me to let go of at least some of my fear

Kathleen Kendall-Tackett, Ph.D., IBCLC, a breastfeeding expert—whom I’d heard talk about postpartum depression and breastfeeding issues in a podcast and emailed out of the blue–who talked to me for quite a while on the phone trying to troubleshoot our issues and provide encouragement

Dr. Jessica Bloom, cousin who just so happens to be a pediatrician, who talked me down from ledges and watched Stella for a whole day (after all, if you can’t let a relative who is a pediatrician watch your child, then you are hopeless!), when I was really low and about to starve to death from anxiety

Barbara Reilly, a wonderful, funny, compassionate friend who provided much needed food on multiple occasions and insisted on watching Stella, allowing us to get dressed up and go out for five whole hours!

Susie Estok, a fellow writer and kick-ass friend who watched Stella while I got my hair cut then spent the day with us, making me feel a lot less lonely and lot more hopeful

Maureen Devine, a friend and co-worker with the most amazing heart who stepped up to provide nourishment and support

Rocio Carballo, a mom who was in the same boat with the same fears who contacted me through the blog… we were able to relate and helped pick each other up when we were down and I’m so happy to say that her precious Diego is also tube-free and eating like a champ!

Dr. Stephanie Farrell, an engineer and professor that I don’t know at all and emailed out of the blue about her experiences with tube weaning her own daughter and who sent me the most supportive, wonderful reply

Trish Norton, a mom (to whom I was connected through Robin Glass) who went through very similar struggles with her daughter Libby and who took time to talk to me, a complete stranger, honestly and openly about her experiences and how she got through it, making me feel so much more normal and less crazy and alone

I will always think of these people with such fondness and gratitude. When Stella was not gaining weight, before we had any idea of what was bothering her, that growth percentile curve felt like a cliff. We were careening around a narrow corner and about to fall into a deep, dark abyss when one by one, Team Stella stepped into our lives, and gently but firmly pulled us away from the edge.