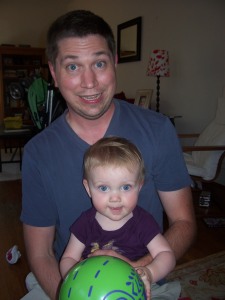 Having a ball. The belle of the ball.

Stella’s father (Cody) and I met playing basketball. He was one of two men on our team, and ours was the only team in the league with women. Yep, it was a men’s league and we bitches crashed the party. They were GUYS, and even though most of us played some college ball (granted, division three) and most of them probably rocked JV in high school, they naturally assumed we were a joke and–holy shitballs–were they wrong. We won the league championship and I put that accomplishment right up there with Stella’s 32-hour unmedicated birth, and while we’re at it I have to throw in my leading the Bay State League in scoring my senior year in high school–I still  don’t know how that happened. It doesn’t make sense at all, except that I filled in any lack of social life with constant shooting practice at the outdoor court at Weston High School, usually surrounded by very impressed ten-year-old boys and their parents. And that was all the male attention I needed, thank you very much.

I can admit that, while Stella has not yet entered single digits, I’ve been trying to deny my desire for her to enjoy (okay, fall head-over-heels-in-love with) basketball. I’m trying to keep it at bay or at least on a simmer, but it’s like buying a bag of Kettle Chips the size of a suitcase, because it’s a much better deal than the individual serving bag, and besides, it’ll last you a couple weeks because you will only eat a handful a day with lunch, and then an hour later the bag is completely empty, not even crumbs are left, and your cube smells like salt-and-vinegar burps, CODY. I can’t help it. I love basketball. It was at or near the center of my world all the way from middle school through my early 20’s. When, in middle school, my friends were developing obsessions with NKOTB and attending Marky Mark concerts, I was cultivating an unhealthy attachment to the Boston Celtics, watching their games instead of doing homework and plastering my walls with posters of Larry Bird, and then Reggie Lewis.

I’m trying hard not to label Stella. But for the love of all things sporty, she sure seems like an athlete to me. The toy that makes her eyes most sparkly and bright is a ball (followed closely by books: STUDENT ATHLETE, anyone?). It is green with blue polka dots and very bouncy and by far her favorite *thing*, and she’s been playing catch–no, really, I mean throwing the ball to you and waiting for you to roll it back and throwing it to you again and so on–for a good five months now. She’s strong as an ox, lean and muscular and solid. She’s fast. She loves the water, and will actually try to swim if you let her. She thinks the shallow end of the wading pool is crap, preferring to (attempt to) take rafts and beach balls away from the rambunctious eight-year-old boys in the deep(er) end. Splash her in the face–she’ll laugh and splash you right back. She never, ever stops moving–in fact, she’s been very squirmy since birth, by six weeks could hold her head up for long periods of time as she was desperate to look around and find someone to yell at because boy, did her little cow’s-milk-protein-intolerant tummy hurt with the pound of cheese I ignorantly ate at every meal. (Yep, I’m even proud of her neck strength.) She was never content to sit around, which is exactly what have I wanted to do since I became pregnant and especially after giving birth.

Her walk is really more of an easy yet brisk jog. She runs up and down the hill at the park and if during her ascent she falls, she’ll steady herself and then use the grass to pull herself back up and continue with dogged determination. During descents, I usually offer my hand (she accepts when on very uneven surfaces like giant boulders or flowing lava) because the sight of her running down an steep-ish incline is nerve-wracking. But she doesn’t take my hand, and she doesn’t fall. So I let her go and I savor the sight (really more of a blur) before me. Lately, she’s been trying to stand on her head, or so it seems, and winds up in a downward dog position, hanging out upside down and peering back through her legs with a sly smile. I expect she’ll have mastered the somersault by Monday and if not, we’ll be hitting the gym to work on her core strength, and probably do some suicides in which case Stella may need to take it easy while I get back in shape.

We are at the stage where she is now a very good mimic, an eager and quick learner. We have so much fun. In recent weeks, she’s been putting the phone to her ear and if I hand her a brush or comb, she’ll move it across the back of her head, because let’s face it, the front pretty much styles itself. Yesterday morning, I taught her how to kick, and she hasn’t stopped since. The video below is from yesterday afternoon. At first her dribbling seemed like a fluke, but she’s done it about a dozen times since then, and I can’t help but be completely dazzled. I’m her mom and that is my job and it comes very naturally to me, as it should. This video, below, co-starring PaPa (Cody’s dad), may be very ho-hum to you but it warms me up and makes my heart grow at least another centimeter in diameter. Until yesterday, she’d walk up to the ball, then pick it up and throw it. She never let it touch her foot. But now she is purposefully kicking it along and it’s just about the best thing I’ve ever seen. And tomorrow, she’ll do something else for the first time and it will be a new best-thing-I’ve-ever-seen. Every parent knows exactly what I mean.

Stella relishes every adventure, “big” and small–from trips to see the seaplanes and kites at Gasworks Park and tours among the elephants and giraffes at the zoo, to forays to the fridge to examine bottles and jars and visits to the dust bunnies in the bedroom closet. She expresses her joy with ecstatic physical outbursts. Bouncing and arm flailing and squealing and rolling with total exploding exuberance. She’s my happy little athlete. Yes, yes, I know. That’s a label. And it’s very possible that she’ll one day eschew soccer balls for fluffy pink tutus, and that’s okay. (Though, let’s face it, passing over a basketball for a soccer ball is pretty much the equivalent–KIDDING, sort of.) Really, I’m just following her lead. Trying to keep up and shaking my head in amazement, with gratitude and Stella’s goose-poop-covered shoe smacking me in the face.