She gets more email than me. Probably has more Facebook friends, too.

Spring sprang for a few hours today. And it was lovely. Stella and I went for a sun-drenched walk, and later, we sat outside on the quilt Mimi made. (If only Stella would put down her Blackberry and live in the moment once in a while!) This evening, it rained cats, dogs, and ponies. It was like two days’ worth of weather crammed into one. I was confused. Stella loved it all. She enjoys rainy walks in the carrier and even helps me hold the umbrella.

Have I mentioned how much Stella loves going for strolls in the Baby Bjorn? We head out two or three times per day, rain or shine. I am beginning to wonder if our wandering, and general lack of structure, is getting the way of a proper “sleep schedule.” You see, I basically follow Stella’s lead. When she seems hungry, I feed her. When she seems tired, I put her down for a nap, or to bed for the night. In recent weeks, she developed a lovely habit of falling asleep upon finishing a bottle. HOWEVER. Lately, it isn’t so easy. Stella is fighting sleep, especially during the day. And I’m not sure what to do about it.

There are lots of theories on why this happens and what to do about it. I have an annoying book called Healthy Sleep Habits, Happy Child. I hadn’t looked at it in months but perused the section about five- to 12-month-old babies today, immediately prompting near record levels of neurosis. Apparently, Stella should be awake by 7am. Then have a nap at 9am and 1pm, and perhaps, another late afternoon nap if she seems tired. Well, today, Stella woke up around 9am, napped for almost two hours (unusual and fantastic) at noon, then napped for five minutes at around 4:30pm. And that was that until she went to bed at 9:30pm, after her last bottle of the day. Every day is a little different, but most often she doesn’t nap for more than 30 to 45 minutes at a time tops. As a result of this, my annoying book tells me, my brilliant, usually cheerful Stella is on the path to A.D.D. and behavioral problems. (I told you this book was obnoxious–not to mention HORRENDOUSLY EDITED. I will admit, however, it did help us a bit early on. Especially the bit about how sleep begets sleep, and that in their very first weeks and months, babies can really only be happily awake for one to two hours at at time.) In recent days, a troubling trend of screaming and crying–even though she is obviously tired and in need of a nap and rubbing her eyes like crazy–is emerging. The book says that by comforting her, I am being a terrible, terrible parent. What to do? 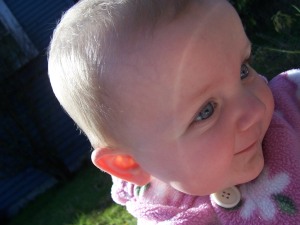 Before I decide what, if anything, I need to do about Stella’s sleep schedule or lack thereof, I am going to see what happens over the next day or two. We just enjoyed a visit from Mimi and Grampa (my parents), and perhaps all the excitement got us out of our normal rhythm. Or maybe she’s teething. Or, I’ve heard that the development of new skills disrupts sleep, so perhaps her recent advancements in the areas of rolling and sitting up have thrown her out of whack. Or the normal phase of seperation anxiety is to blame. Or maybe there’s a pea under her mattress.

THE THING IS. After all the craziness with the feeding aversion and the tube, I think I get especially worked up when she gets worked up. When she cries, there is a part of me that is truly terrified that something is seriously, seriously wrong and if I don’t jump on it, it will explode in our faces. Because way back when her feeding issue was just starting, there were signs. They haunt me. 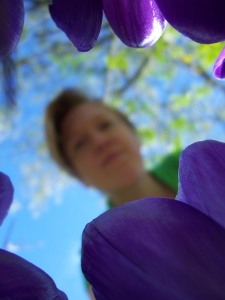 Crocus Pocus. Spring is starting to work its magic. Hopefully its powers extend to napping.

But there is another part of me–a sane part buried deep within, a beaten down part that often gets drowned out by panic–that knows that babies cry. And that babies often prefer play over sleep. Hek, so do I. Even when I’m exhausted, and when earlier that day I berated my bedraggled self for going to bed late, I’ll stay up and watch LOST. Or write a blog post. Or check Facebook for the billionth time. It’s the same thing. Only instead of Facebook, she has a network called “mom and dad.” And instead of LOST, she has the suspenseful thriller entitled “mom and dad.” And instead of a blog, she has Goodnight Moon (read to her by mom and dad).

So, I’m trying not to worry too much. And just  follow my instincts.