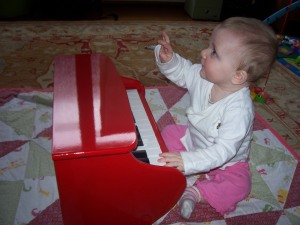 Stella's got what they call "stage presence."

On St. Patrick’s Day, Stella turned seven months old. I’m pretty sure that means she can get a driver’s permit. And maybe even a part-time job. At the very least, she can sit up for long periods of time before the weight of her large head pulls her over. She can tickle the ivories like you wouldn’t believe. And when sitting in her crib, she can pull herself up to a kneeling position–the gateway to standing.

That evening, as my amazing corned beef simmered in a broth of beer and spices, Stella’s piano showed up on our doorstep. The house smelled like Ireland, and dreams, which was somehow extremely appropriate. We opened the box–an event that was very, very exciting judging by Stella’s even-wider-eyed-than-usual expression as I sliced the tape with my trusty blade–and out the baby piano came in all its shiny red glory. I placed it on the rug, plopped Stella in front of it, and she banged those keys as hard as she could while smiling as wide as she could. Then she promptly forgot all about it and tried to eat the accompanying manual and play-by-color sheet music. Paper is Stella’s #1 passion for now. But music is a close second. After I tucked away the paper goods, she resumed her performance with incredible enthusiasm, intermittently grabbing the top and, impressively, pulling the entire piano toward her. You could see the wheels turning in her head; “Maybe if I try hard enough, I can get the top of this delicious piano into my mouth… mmmmm, piano…..”

Stella’s Little Mozart Piano is really like a musical friend than a toy. Right now, she simply sits on the floor in front of it, and it’s the perfect height. But the piano can be raised up by attaching the base that comes with it, allowing the child to stand or sit on the accompanying shiny red bench and play, making it “the piano that grows with your child.” I think it’s brilliant. Stella absolutely loves it. We really should be saving money rather than spending it, but this was worth the splurge. A long-term investment in FUN.

Yesterday, Stella was not herself. She was cranky and tired in the morning, and grew steadily more so as the hours passed. I realized that she had spent more time sleeping than awake, she was a rag doll, crying unless I held her. And instead of squirming and pushing away from me to look at her surroundings, she curled up into me, resting her head on my chest. Stella was sick for the first time. She had a slight fever and threw up a couple times that evening. But today, she is back to her old self. She dropped that bug like a bad habit! Cody took her to the doctor this morning, and her fever was gone. She checked out fine. And really, seven months was an excellent run!

HOWEVER. Her doctor’s visit entailed a standard weigh-in. Sigh. If she hadn’t fallen ill, I wouldn’t know that she’s only gained about 6 ounces in a whole month. Now I’m anxious and confused. I’m trying to cope, but my attempting to remain calm in the face of this worry is like an alcoholic trying to stay sober in a bar. About a week ago, we switched Stella’s formula from a 24-calorie-per-ounce concentration to the standard 20-calorie-per-ounce ratio. Granted, this means that for most of the month, she was on high-caloric formula, so perhaps we can’t blame the new lower concentration. Since the switch, I’ve been keeping track of her intake and it’s been high–between 30 and 32 ounces per day. Right on track! And this is in addition the face that Stella is mastering the art of spoon feeding. At first, far more food wound up on the floor, high chair tray and her bib and clothing than in her mouth. WAY MORE. But now, she’s swallowing way more food than ends up on her and various kitchen surfaces. On Tuesday, she even finished a whole container of peas in one sitting. Just another reason I’ve been saying “Bravo!” to Stella. 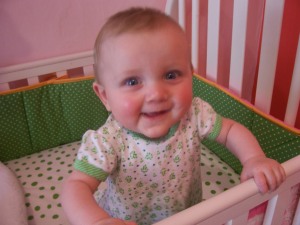 So, in regards to her minimal weight gain, I am completely baffled. I emailed her occupational therapist to get her thoughts, and perhaps some reassurance. Stella’s doctor didn’t express any concern over her weight, so my worry is “proactive” as usual. I’ll probably schedule an eight-month weight check in order to ease my mind. In the meantime, I’m trying to focus on Stella’s behavior and demeanor instead of her weight. Certainly not the fact that she still fits in some 3-month size clothing. She seems happy and healthy–with the exception of that 24-hour bug–and that’s what counts.

When we’re not playing the piano, eating, napping, or out for a walk, we’re trading fake coughs. I’ll fake a cough. And she’ll fake one back. And then we laugh. It’s good fun, though probably setting her up for hypochondria. Or an acting career.